by Chip Brogden | Christ & The Kingdom of God 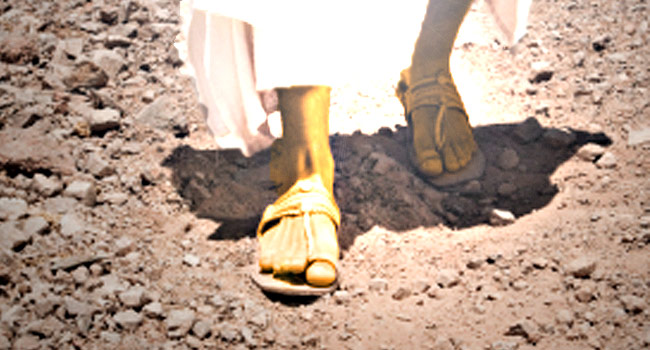 “And has put all things under His feet, and gave Him to be the Head over all things to the Church” (Ephesians 1:22).
“And His feet were like fine brass, as if they had burned in a furnace… and when I saw him, I fell at his feet like a dead man…” (Revelation 1:15-17ff).
When John was given a revelation of Christ in the Isle of Patmos he described the feet of Jesus as “fine brass which burned in a furnace.” Brass is a symbol of judgment, and the furnace is a symbol of wrath, purification, and refinement.

This dimension of the Lord Jesus was something quite new to John. Because Jesus did not come to judge the world right away, but to save it, we tend to think of Jesus only in terms of the “Lamb” – meek, silent, longsuffering, and turning the other cheek. He certainly is all that. Yet here we get a glimpse of Jesus as the “Lion”. He said He was indeed a King, but that His Kingdom was not of this world. Up until now the kingly aspect of Christ and the majestic glory of His Kingdom had remained hidden.

When this other side of Christ was revealed to John, he “fell at His feet as though dead.” At the Last Supper, John had leaned on the Lord’s breast and eaten dinner with Him. In this context, however, he can do nothing but collapse at His feet. There at His feet we discover there is a difference between the Holy and the Human; the One Who comes from Above, and the ones who come from Below; the One Who is Spirit and Truth, and those of us who are merely flesh and blood. His feet are burning brass. This is His majesty, and His righteousness. It immediately identifies Him as King of Kings and Lord of Lords, the Righteous Judge, the Living Word Who discerns the thoughts and intents of the heart.

We note this and call attention to it, for this is what makes revelation so significant, so vital: Christ can, at will, either reveal Himself to us, or hide Himself from us. If He chooses to hide Himself then He appears to be nothing more than the carpenter’s son from Nazareth, and there is nothing about Him which arouses our admiration or commands our attention. But if He chooses to reveal Himself to us then we will see Him as more than a Man. We will perceive in Him something which is other-worldly. We will fall down at His feet.

When we are before Him in this Kingly capacity we dare not lift ourselves up beyond the level of His feet, for He is Lord and Christ of all. To sit at His feet is to die to myself and agree with God’s estimation of Christ as Head. It is to acknowledge Him and His Kingdom as preeminent. Now would not be the time to speak of the Lord as our friend and pal and someone we walk around with hand in hand. Oh, that is included in Him, and I certainly enjoy this relationship with Jesus. It is very intimate and personal, even fun. And of course there is much to say concerning the Bridegroom and the Bride, emphasizing how Christ loves the Church, and how we may have intimacy and communion with Him. We need to hear it and thank God for it.

But there is another side to this Lion of the Tribe of Judah which the Church, by and large, has yet to discover. We talk about coming up to the throne and boldly making our requests, but we have only a dim idea what it means to come before the very throne of God and fall down at the feet of Jesus. We casually sing songs and have our praise and worship services without really knowing what we are doing. We have lost a sense of the MAJESTY of the Lord Jesus Christ.

When they came to arrest the Lord Jesus in the garden, He asked, “Who are you looking for?” And they answered, “Jesus of Nazareth.” He simply said, “I AM.” When they heard this they fell over backwards to the ground. No one can stand before I AM and retain any of their strength. To the ground we will all go, for that ground is holy. Every knee will bow, and every tongue will confess that Jesus Christ is Lord. This revealing of Christ is sufficient to bring saint and sinner alike into absolute surrender and submission. Friends and foes alike find themselves at His feet, quite unable to stand before Him. He does not have to raise His voice or call down fire from Heaven or do anything other than simply reveal Himself for Who He is. Every doubting Thomas eventually cries out, “My Lord and My God!” when they finally behold Him.

We can talk about His presence and His glory and His majesty – yes, we can even sing songs of worship which incorporate these words into the lyrics – but we do not really conceptualize or comprehend what it means. If we really did see something of the majesty and the glory of the Christ of God we would not be so casual. We would be reverent. We would not take the Presence for granted. If we can take Him for granted then we have failed to apprehend Him. We have not yet seen Him. We do not yet know Him. We need to spend some time sitting at His feet.

John gives us a new title for Jesus: “Ruler of the Kings of the Earth” (Revelation 1:5). When the Kingdom has come and God’s Will has been done on Earth, then the Scripture will be fulfilled that says:

“All the ends of the earth will remember and turn to the Lord, and all the families of the nations will bow down before Him, for dominion belongs to the Lord and He rules over the nations” (Psalms 22:27,28, NIV).

There beneath His feet of brass we touch His glory. Come quickly Lord Jesus, that you may have the manifest preeminence in all things – beginning with us individually as Your disciples, with the Church as Your Body, and ultimately with all Creation, that Your Kingdom may come and Your Will may be done: as in Heaven, so in Earth. Amen.